Taking PRIDE in Who We Are

Did you know that June is ‘Pride Month’? ‘Pride Month’ is a month in which the voices and culture of the LGBTQ+ community are celebrated. International and local companies, politicians, artists and sportspeople are actively showing their support for Pride Month, and our school decided to get involved.

But what does ‘pride’ actually mean? Exactly who and what are being celebrated? The students from 7A took the time to find out.

After researching the Stonewall uprising of 1969 in New York City, considered a catalyst for LGBTQ+ rights, 7A tested their knowledge of the LGBTQ+ community in a quiz. Subsequently, we studied the symbolism of the rainbow flag’s colours before brainstorming the many facets of our own identity.  Some students even got creative designing their own flags or symbols as an expression of their identity.

Finally, and perhaps most importantly, our students had the following words of encouragement for anyone struggling to feel proud of who they are, regardless of their sexual orientation or identity:

“Help people to accept themselves by paying them compliments. Then they know that you will stay around and won’t leave just because of who they are.”

“You can tell them that they should be proud of what they have already achieved.”

“Praise them for things they have done well. Show your respect and appreciation for them. Lastly, tell them that they are a good person just the way they are.”

“Support that person wherever you can. It is easier to be proud of yourself when someone is proud of you.“

“If your friends don’t accept you for who you are, you need better friends.”

“No matter who or how you feel, you’re unique! No matter what others think, believe in yourself and take pride in who you are!” 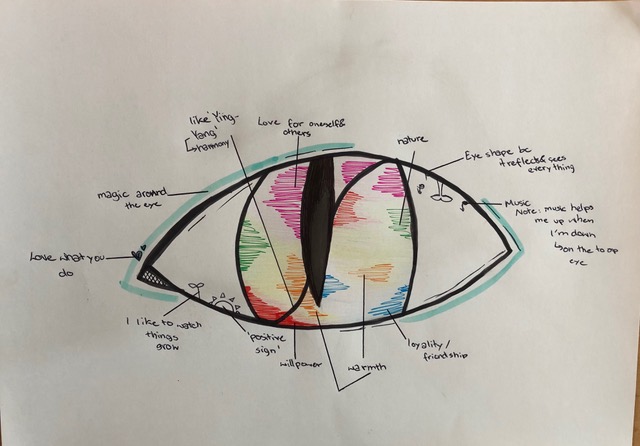