An interactive play about national identity, politics and change

In the last week of December the advanced English course with Mrs Frühauf watched a new and very interesting theatre performance produced by the Platypus theatre Berlin.
Here you can read what some students have to say.
“It is set in London in 2026 and brings up questions about political commitment and becoming an adult. The four protagonists couldn’t have been more different: A young girl with Pakistani and German roots who was raised in Britain …not yet interested in politics at all;  an Australian influencer with a British passport; a Brazilian activist seeking refuge from political prosecution in her home country come together and stay at the “Safestay Hostel” owned by a Finnish woman who has been living and working in Britain for many years.”
After some drastic political changes their world is turned upside down…
“In my view, these characters are well chosen as they represent a broad range of people being affected if the political demands of right wing politicians were put into action.”
“I enjoyed the play very much. The actors had to work with minimal scenery, props and costumes and made that work. It is a serious topic, presented in an understandable way for students with a few funny scenes to lighten it up.”    (Anna- Lena) 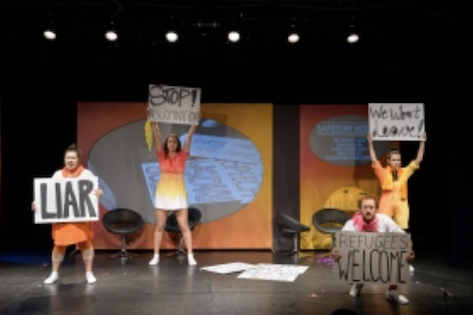 “A new government with an autocratic leader changes citizenship laws. This leads to tragic situations and questions: Why does a young woman have to leave the country in which she was born and raised?  Why does the Brazilian activist have no chance to get a job? … Why can’t we simply belong to the nation we would like to?”
“The setting of the stage was simple but expressive. Little alterations like changing the colours of the costumes achieved great effects.”
“I didn’t like the ending of the play and found it quite disappointing. At the end no one stays in Britain…. The first thought that comes to my mind is that such an ending portrays the weakness of the people and the fact that governments will always be superior. This undervalues the possibilities of politically committed and active people.”  Lisa- Marie B.